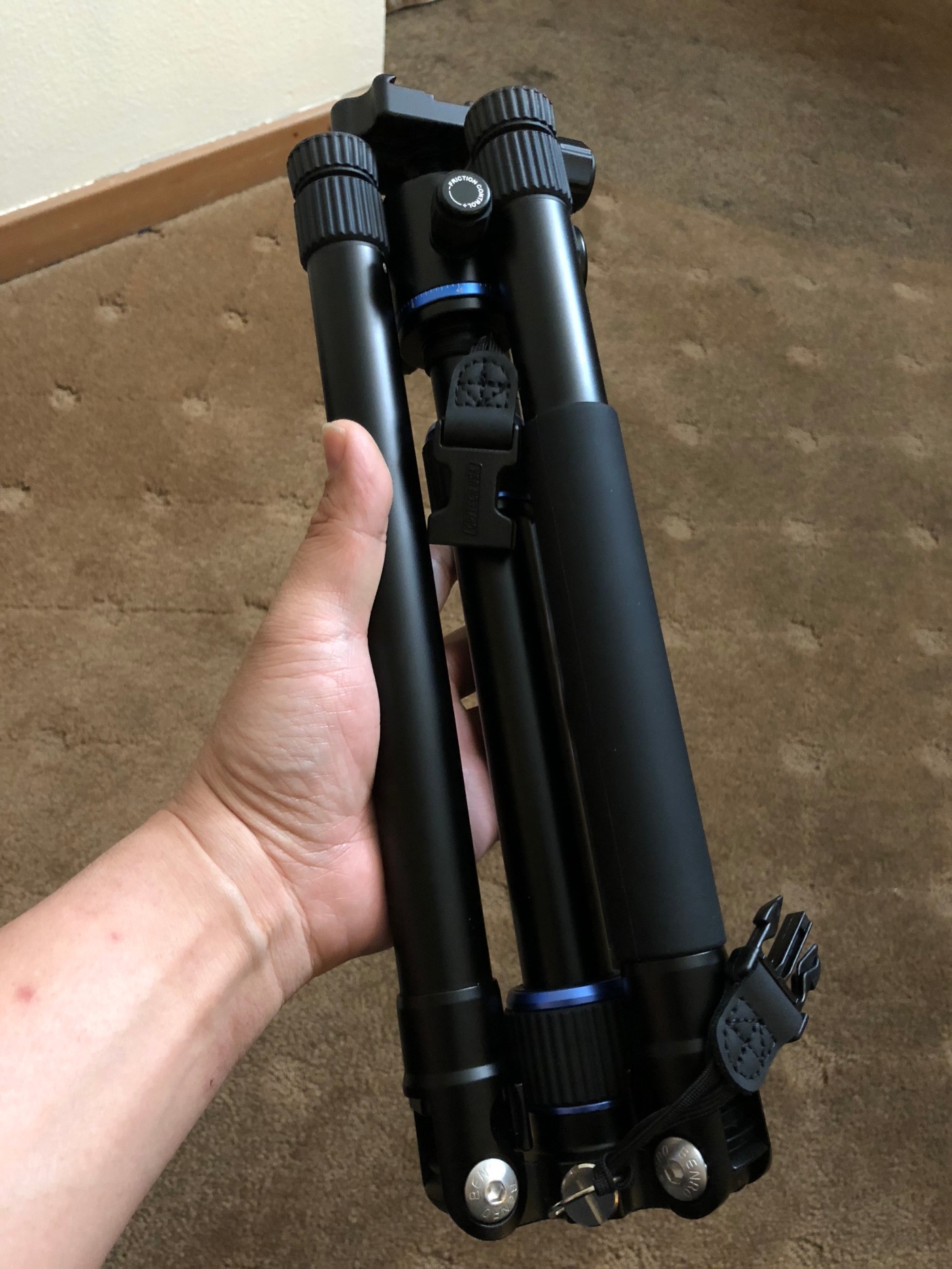 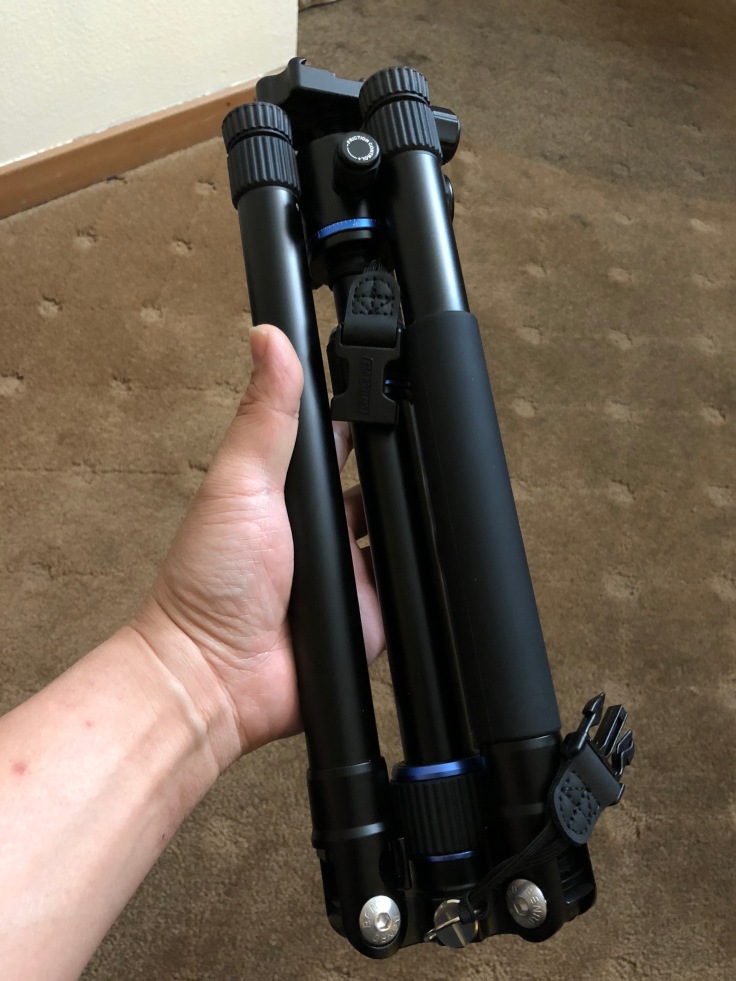 I recently introduced you to my new tripod, the Benro Adventure 2 Carbon, a tripod that’s rock solid, light weight and the right height at its most stable position for most people. However, it is a bit large for everyday carry. Even I’ll admit that, while I’ll take it anywhere I plan to use a tripod, there are times I go out and am unsure if I’ll want a tripod and for those times the Adventure 2 will stay at home. This necessitates owning a second tripod.

From the brands trusted for quality, stable tripods, very few of them make one that falls within the dimensions of a “travel tripod” yet have enough stability for them to put their name on it.

Why didn’t I just buy a true “travel tripod” instead of two separate tripods? Because the vast majority of travel tripods compromise stability far too much to be relied upon for primary use. From the brands trusted for quality, stable tripods, very few of them make one that falls within the dimensions of a “travel tripod” yet have enough stability for them to put their name on it, or they’re too short for my needs, or all of the above. Manfrotto is an excellent example of a company with junk travel tripods that tarnish the name of their pro tripods. They’re so bad, if most people knew they owned Gitzo, less people would buy Gitzo.

While I’ll take the Adventure 2 anywhere I plan to use a tripod, there are times I go out and am unsure if I’ll need a tripod and for those times it will stay at home. For example, going out in the evening for golden hour but unsure if i’ll need a tripod for some blue hour shots I can’t hand hold.

Since I was so satisfied with my previous purchase I decided to give the Benro ProAngel Series 1 a try. The important details first:

As you can tell by the dimensions, this is a bit smaller than your average travel tripod, falling into the compact range. In fact, it will fit into most camera bags for exceptional portability as the external dimensions approximate those of a 70-200mm ƒ/2.8 lens for 35mm cameras. Unlike most ultraportables, this one has unique legs locks that allow you to setup and take down in a single twist of the feet.

You may have seen this style of lock used on selfie sticks targeted at the GoPro crowd, or especially in another tripod product, the MeFOTO Backpacker, Roadtrip and Globetrotter Airs. To be honest, it was my short experience with them that made me consider the ProAngel and it was a flaw in the MeFOTO Air series that made me not consider theirs. Mind you, this doesn’t speak to the construction, as the aluminum parts on the Benro ProAngel are far thicker and sturdier than what you’ll find in those selfie sticks, or even the MeFOTO Air.

The MeFOTO tripod legs unlock by twisting the foot about a half turn, allowing you to fully extend the legs. The problem is that you can’t adjust the tripod legs easily to account for uneven terrain as you have to grab it by the foot. Nor can you collapse only the thinner sections to shorten it up and maximize stability, which is something any tripod with independent locking sections offers. Benro solves this by using 2 stages per leg yet offers all the same convenience with very compact locking grips so all locks can be disengaged with a single hand, no matter your size, yet adjusted to suit uneven ground without risking full leg collapse. Additionally, Benro chose a more standard center column lock system and longer legs rather than a longer center column, unlike MeFOTO, making the setup inherently more stable.

Like my old tripod, stability drops off exponentially as the center column is extended, which is why tripods this size will never be my primary tripod again.

Honestly, the ProAngel is nowhere near as stable as the Adventure 2 but it’s far more stable than the cheap Chinese travel tripod I bought from Amazon. I can’t really complain about the stability as that’s the compromise you make for compact size, lighter weight or both. The overall stability was a bit of a surprise considering its form factor and size, to be honest. Like my old tripod, stability drops off exponentially as the center column is extended, which is why tripods this size will never be my primary tripod again.

The legs fold and extend smoothly and the locks engage surely, but I have one complaint and it’s that I wish the locks had a more positive response during engagement. Otherwise, the second stage locking mechanism is an ingenious way to overcome the problems with leg adjustability in a way that doesn’t negatively affect speed, convenience, portability or safety.

Like any other twist lock, they tighten and that’s it, but the throw is so short on this application, I wish there were some sort of click or felt a detent to tell my brain the leg is positively locked into position. If there were a half to full turn of the lock until it tightened, this wouldn’t be an issue, like any other twist lock… but the throw is about a quarter turn and goes from zero to full tension in that span.

As for the panning ball head, the included B0 has a 60mm clamping surface, clamp safety lock, spirit level, pan and ball locks and a friction control knob. It’s basically a miniaturized version of the B2 ball head that came with my Adventure 2.

At $149 for the kit, including a nicely made carrying bag, as an ultracompact tripod to take “just in case,” it’s excellent but with one caveat: the compromised stability is enough to prevent me from recommending it as a primary, daily use tripod or only tripod. That being said, build quality and stability far exceeds what you’ll find in this segment and will accommodate most mirrorless and smaller dSLR setups with ease. For larger body and lens combinations, like Fujifilm’s pro glass, Sony’s α7 with telephoto lenses, or larger, you’ll probably want to move up a level to the ProAngel 2 or 3. With those you get a larger ball head, slightly beefier legs and more height, but at the cost of folded size. The price seems to go up in $50 increments with every series jump, but is also available “legs only” at a sizable discount if you already have a preferred ball head to use.

I know it sounds like I’m contradicting myself when it comes to judging the stability of this tripod, but I’m viewing it on a different scale than what I used for the Adventure 2 tripod. I realized during the purchasing phase that I have to rate them on different scales because their respective design ethos, foci, market segment and target demographics are completely different.

The Adventure 2 is a smallish, full sized tripod whose design and price is dictated by an attempt to maximize stability. On the contrary, the ProAngel 1 design makes compromises to its stability to meet specific convenience and price goals. As such, I cannot fairly make an absolute judgment of it’s stability, and by extension design, in a vacuum. At the risk of confusion, I’ve chosen to make two: one judgment compared with my primary tripod and one judgment compared to others in it’s market segment.

Bottom line, the Benro ProAngel is the tripod I plan to carry when I don’t plan on needing a tripod, i.e. the times I’m not purposely going out to do >20 second long exposures. This is the sort of tripod that’s suited for walks during evening golden hour and I may want a few blue hour shots that I’m unable to hand-hold, or even a minute or two when set at it’s lowest position. Approximately the size of a full frame, 70-200mm ƒ/2.8 lens, it fits inside my Lowepro Flipside Trek 450 or Chrome Niko Messenger, or I can clip it outside my ONA The Prince Street for use “just in case,” and it doesn’t weigh me down. For full size use, it’s fast. For compact use, it’s even faster. Ultimately, the small size and weight make carrying it inconsequential but the benefits are huge, allowing me to take the sort of shots I normally wouldn’t due to not having a proper sized tripod with me.

On a side note, I’m sure you’re rolling your eyes and thinking, “use a monopod, asshole.” Monopods don’t stand on their own and ones converted to do so aren’t stable, but they can be used to extend exposure times out to a second or two, depending on your technique and ability. Monopods have their place and I own one, but I may be trading it in for the Benro ProAngel Monopod. Using the same telescoping and locking design of their ProAngel tripods, the monopod collapses down to less than 14 inches and under 1 lb, far smaller than my current monopod, and starts at only $49.