So I had this vision in mind: I wanted to get a photo of the Space Needle superimposed on Mt. Rainier. Now that I have the 100-400mm ƒ/4.5-5.6 lens from Fujifilm, I’m able to get this shot… if it’s even possible. I’ve seen others who’ve composited the Space Needle onto a photo of Mt. Rainier, or Mt. Baker, and even Mt. Hood (uh, wtf?) and the results always look less than stellar, mostly because I’ve lived here most of my life and I know those shots weren’t possible using the angles they’d chosen of either object.

I wanted to do this for real, all in camera, so I consulted a map and looked around Queen Anne hill and settled on Bhy Kracke Park. Seeing examples from the park, I knew it had the right elevation and clear line of sight for the shot I wanted. It was just a question of whether the two objects would line up from there. Sunday morning, Craig and I went out to find the park and investigate. Our plan was simple: if it was clear, we’d get the shot I’d imagined. If we got the same fog we’d been getting for the past 3 mornings, we could head straight over to Kerry Park and get some great shots of it.

We went to Bhy Kracke Park first, arriving around 0600. It was still too dark to see Mt. Rainier at that point. It was also perfectly clear; we were able to actually see some stars despite all of the light pollution. After walking the grounds to get familiar, we then headed for Kerry Park, arriving by 0640 and in time to catch the twilight. Unfortunately, we saw no evidence of fog forming offshore. We captured a few shots of the city as Mt. Rainier’s silhouette began to form in the distance. I also whipped out the 100-400mm and 2x teleconverter to get more familiar with the field of view by aiming for the Space Needle’s saucer section. about a half hour before sunrise, we packed up and headed back to Bhy Kracke. 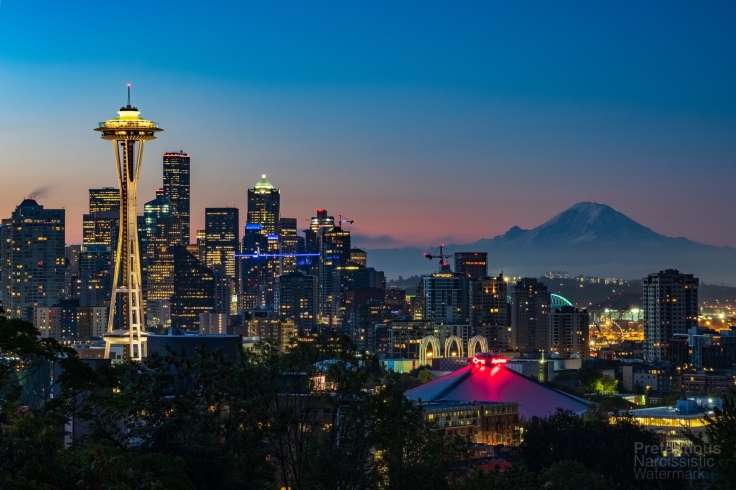 I quickly discovered the view in my mind wasn’t going to happen. As we crossed the hill, I watched as Mt. Rainier crossed behind the needle and disappear behind the downtown skyline. Any chance of lining up the shot would require being positioned at a point somewhere near the middle between Kerry and Bhy Kracke parks. Unfortunately the hill is a dense suburb and there are very few open spaces that offer a clear line of sight that aren’t in someone’s yard. To make the shot happen, I’ll need to get permission to access someone’s roof, somewhere near the intersection of West Highland Drive and Prospect Street.

At least this challenge is going to be harder than I’d originally thought. If I can get it accomplished, it will truly be a feat for me. For now though, I think I’ll focus on trying to photograph the Alki Lighthouse in a picturesque way without accessing the actual grounds.

All images Copyright © 2018 oakie. All Rights Reserved. Images may not be used, copied, downloaded or repurposed in any way without expressed, written consent.

Your memory cards, and how you maintain them, can be the difference between having the shot and making excuses for not having the shot. Backing up is critical but useless if your cards fail you.
Jack doing his best kitten impersonation on Xmas Day.
Up close and personal with Mac.
This one is named Jack and is a stage 5 clinger. This one will climb onto you immediately and will complain loudly if you ignore him. Yes, they're named after @macandjacksbrewingco.
Cat practice. Cat-sitting for the holidays. This one is named Mac and is the more introverted one.
Last one before moving on.