After getting back into photography, I quickly discovered that I liked doing landscapes. Before I quit, I enjoyed portraits and sports/action. After a nearly 10 year break, and aging during that time, I learned to appreciate the slow pace and solitude provided by landscape photography. Once I settled on that, I made the decision to try and do as much “in camera” as possible in an attempt to really teach myself the art of photography, rather than simply exploit the science of photography, to create a photograph. As such, I slowly learned exactly what that meant and have been on a quest to acquire the best tools for me to do so, starting with a solid tripod and high quality circular polarizers.

From there, I continued. I bought a set of B+W ND filters in 3-, 6-, and 10-stops. Then, I bought a Formatt-Hitech (F-H) 100mm Firecrest filter holder kit so I could use graduated ND filters, solid ND filters, and a circular polarizer all at once. I chose that kit because, at the time, it was one of the first holders to integrate a polarizer within the holder and had shrouds to block light leaks. Since B+W didn’t make 100mm filters at that point, I chose an unknown brand for multi-coated glass filters, going with the standard 3-, 6-, and 10-stop and adding a 3-stop soft graduated ND. What I soon discovered was the importance of high quality coatings and infrared filtration. Without it you can end up with a significant color cast. In my case, an extreme magenta color shift that worsened the longer the shutter was held open. 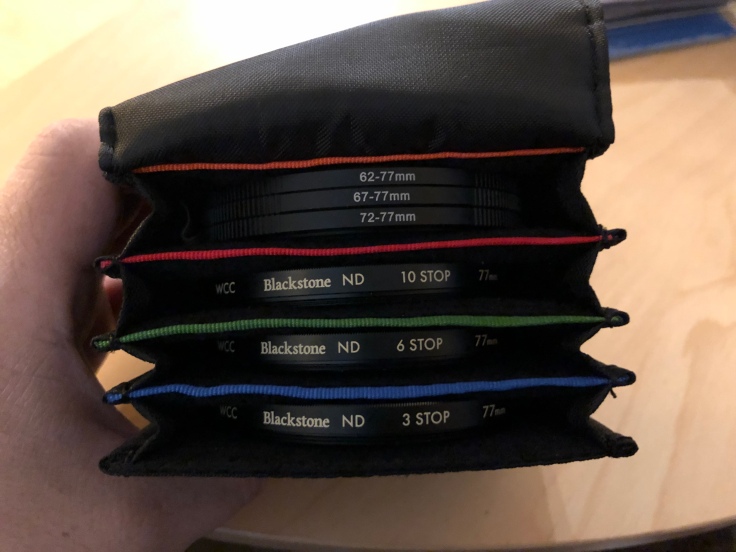 Granted, color casts can be compensated for and in my case I was able to fix it in post but it was often time consuming, especially for shots with a 15 second shutter speed and slower. However, the truly difficult part to correction in post was being unable to create a universal preset. Each shot required me to correct the color manually because of a lack of consistency across my collection of disparate brand and quality of filters. So, I decided recently to correct my issue by choosing a single brand and model of ND filters across the board, specifically one that featured IR filtering, anti-flare, hydro- and oleophobic coatings, and used a single process consistent across both their screw-in and drop-in filter lines. Of course, this drastically narrowed the available options on the market. In the end, I decided to go with Wine Country Camera (WCC), based on both the quantity of reviews available and the quality of their filters based on those numerous reviews. WCC claims their screw-in filters use the exact same glass and process of their 100mm filters. Unfortunately, the one issue I ran into is WCC’s limited selection of graduated ND filters, an issue not unique to WCC. So, I chose to go with Haida Pro II for grads since I already own a Haida Pro II 3-stop reverse ND and am satisfied with the performance. My reasoning: I intend to always use the grads in tandem, with a solid ND filter, since I always did so previously. And so, with an IR filtering solid ND in place, whatever color cast that may result should be controlled and consistent across all grad filters, making flare resistance the only feature of real importance for me. Based on my previous experience, the Haida Pro II 3-stop Reverse Grad ND controls flare extremely well, even when shooting directly into a sunset, so I have no reservations. Why not use Haida across the board? Because of the lack of credible reviews for their newest filter series, Red Diamond. WCC offers a very well regarded solution while Haida Red Diamond is, so far, an unknown quantity and I really wanted to get something I can trust immediately.

So, I began with a WCC 3 filter set of 77mm screw-ins. A few weeks later, after confirming the output quality of the filters, I ordered the 100mm 3 filter set. Then I got to examining their holder kit and what I noticed is this: Due to the use of a removable frame, called “lockers,” around each filter, more of the filter area is used compared to contemporary holders that grip filters directly. This makes it compatible with more lenses than conventional holders that grip filters directly. More importantly, it reduces the chance of vignetting on even wider lenses. For example, my F-H 100mm Firecrest holder maxes out at 82mm while the WCC holder will fit lenses up to 95mm, increasing its versatility should the day ever come that I’m able to afford a Fujifilm GFX-50S or Nikon Z 7 to go alongside my Fujifilm X-T2 and X-T3. Comparing the WCC to my Firecrest further, I like the WCC’s recessed first filter slot, a solution to prevent light leaks that does without the Firecrest’s finicky shrouds, and solid locking to the lens adapter plate. The latter allows the holder to be fixed in position or loosened for rotation to line up the horizon on graduated ND’s while allowing the internal polarizer to be rotated independently. The Firecrest doesn’t have a way to lock down rotation, leaving it to spin freely and forcing you to constantly check horizon alignment while using grad ND’s. Another thing about that lock: While never failing for me, has a very small purchase area and makes me worry about the holder accidentally coming free from the lens adapter. Its plastic construction further reduces my confidence, especially in the long run.

While a great system, the Formatt-Hitech 100mm Firecrest holder just has small details that feel glommed on and unfinished. It desperately needs a “version 2” that at least gives it a more robust locking mechanism and adds a fixing screw so the holder can be locked to prevent unintended rotation. If they’re feeling especially creative, a better way to install/remove the light blocking shrouds would also be welcome. Regardless, at $150 the Formatt-Hitech 100mm Firecrest holder system is an excellent value considering the integration of a circular polarizer, light blocking shrouds, aluminum construction, and the inclusion of a polarizer and 67-82mm adapters in the box. It’s less than half the price of the equivalent Wine Country Camera holder system, with one lens adapter, at $349.

After ordering the 3 solid WCC ND filters that arrived with Lockers installed, I became intrigued by the whole design. Thus, after a year of ownership that revealed a few, key “dealbreakers” in the Firecrest system, and in conjunction with my recent birthday, I decided after thorough examination and contemplation to replace it with the WCC holder system. As such, my recent efforts to review my WCC 77mm 3 ND filter screw-in set has been undermined since it would obviously be more beneficial to compare the output quality of the screw-in set to the 100mm drop-in kit, in regards to clarity, diffusion and, most importantly, color accuracy across the two disparate sets. Maybe after that I will address the design and utility of the sets independently if the output quality is consistent between them.

If, for some reason, the output quality and color isn’t consistent between them, I will return them and try a different brand. Of course I’ll throw up a short post to report my findings and resulting action should it come to that.

Overcompensating.
First time shooter, harassed by uncles.
Went shooting with @jason___tanaka, @junior.monkey and Jay's niece, Tina. It was the latter's first time shooting anything significant, so it was fun to watch her succeed.
Just received my @camranger 2(should've arrived yesterday after paying for 2-day shipping but @fedex doesn't care after they get your money).
Sure hope this wasn't the last time @jason___tanaka and I go camping together. If it is, it's been a good run. Too bad we never got to do that overlanding trip.
Hitting up The Kettle in Enumclaw for breakfast is why we camp near Stampede Pass and Huckleberry Creek.