As more and more cameras go hybrid by including truly powerful video recording capabilities, one hardware integration that’s becoming more common is a fully articulating LCD display. This allows vloggers to easily frame themselves by flipping the screen forward. Look to cameras like the Canon EOS R and RP, Fujifilm X-T200 and Panasonic S1H and GH5 to see this trend in action.

To address this, ProMediaGear created a universal L-Bracket that puts the left upright forward of the body to ensure the articulating screen has room function while installed, without having to make adjustments with small tools, and ready to function for portrait oriented photography.

Since then, 3 Legged Thing has produced their mostly excellent, and certainly versatile, “Ellie” universal L-bracket in multiple configurations to fit a wide range of cameras and accept Peak Design accessories. I even bought one for my GFX 50S. However, I soon realized a problem the ProMediaGear L-bracket has already addressed.

As soon as I realized how the upright on the Ellie interfered with my battery door, I was able to devise a cheap solution for manufacture: a small bracket that would accept the rails and to attach the upright with truncated rails, aka screws, forward of the current position. I proposed the question to @3leggedthing’s Twitter account, only to get, “we can’t design a specific bracket for every camera and configuration I’m afraid.”

Never mind that my solution is minimal, universal and can be sold separately as an option or together as a kit. It’s literally 3 parts and 4 holes. It’s also solves a problem of their own doing: the need to carry a 2.5mm wrench with you any time you have to move, or remove, the upright out of the way to use your camera. Specifically, it’s a tool they include with the Ellie but don’t offer separately for purchase in case of loss. Nor do they offer the 2 screws used to clamp the adjustable rail when you inevitably lose one while removing the upright in the field to use your articulating display.

Instead, they write off this idea as “unfeasible” after miscategorizing it. I’m in no way saying I’m a genius, but I have a simple solution created by their own designers whose choices were made with little foresight toward compatibility and where the industry is obviously heading.

So, just to visualize my solution, I’ve created a tag board mockup of it and will tweet this to them in hopes they reconsider. 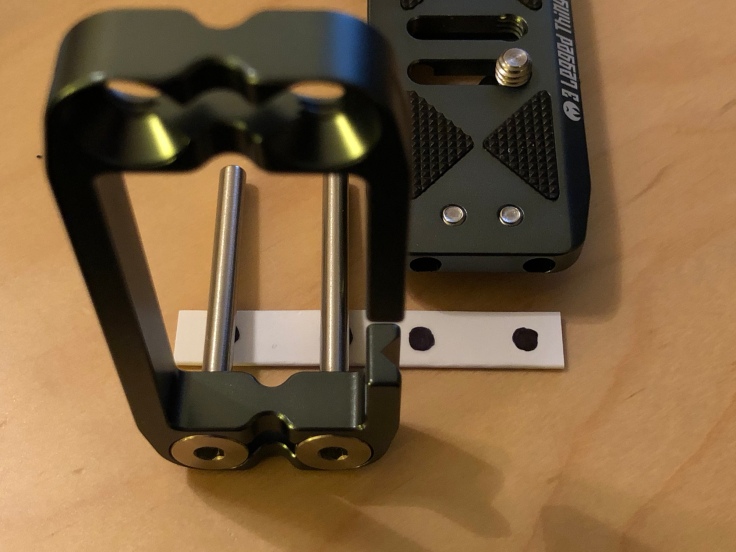 Maybe for “version 2,” they can address some of these choices made in Ellie’s current design: using 2 screws when just 1, or none, would work so rail adjustments aren’t twice as tedious, no place to store the included wrench (or not requiring one for basic use in the first place), lack of alignment marks to annotate center on the base plate, and weakening the upright with a notch when you have to move the upright out of the way to use an articulating screen or open port doors anyways. These are but a few of the odd choices 3 Legged Thing has made with Ellie that you don’t really notice until it’s been installed.

Occam’s razor applies here. Not only in my proposal, but in my solution: I should just drop it and go buy the ProMediaGear L-bracket instead and pawn off this $70 exercise in questionable decisions onto some other less demanding photographer.

But until I do, I ask you this: Would you buy a 3 Legged Thing Ellie L-bracket if this part were included for $10 more or offered separately for $15?

A really quick and dirty edit of a 4 minute long exposure during golden hour. Done before I go pass out. I’ll finish these tomorrow.
Just posted a first impression on the OIS of the GF 45-100mm ƒ/4 for @fujifilmx_us GFX. Use the link in my profile to check it out.
Here’s a #ThrowbackThursday photo that’s more photographic. Taken in 2018 at @roozengaarde during the tulip festival.
It’s #ThrowbackThursday so I’m gonna throw it all the way back to 1999, to the after party for my promotion ceremony to Staff Sergeant, at an izakaya named “Beer,” in Misawa-shi, Aomoriken, Japan.
I know I posted this one a few days ago but I decided to re-process it this morning. The goal was to soften it up and give it more depth by isolating some of the distractions and pushing them into the background. Second pic is the original edit.
#FlashbackFriday to one of my first photowalks.