As I specified in a previous blog post, it took me a long time to convince myself that this was a necessary accessory. I didn’t want to buy it only to use part time because of the high price… the only way it would earn its worth is to make itself a nearly permanent part of my camera.

Right off the bat, I find it to be exceptionally useful for my needs. I prefer using the EVF whenever possible and with the tilt and pan capability, along with the extra length, I can now use the EVF in more positions than ever before. Combined with the magnification, the EVF’s display quality is much better than the rear LCD. That’s not to say the rear LCD is bad, it’s just that the EVF is that much better.

Out of the box, it comes with both male and female hotshoe covers to protect the sensitive ZIF connectors on the top and bottom for EVF communication. Removed, the TL1 inserts effortlessly between the camera body and EVF and powers on as expected just the same as it did without it. No problems there.

Cosmetically, it’s a little taller than I’d prefer. For the price, I would’ve designed it with titanium for more strength and allowing me to make it thinner to reduce its overall profile. I can see already how its height may cause some clearance issues in many bags. With higher grade materials, the height could probably be reduced by 1/3rd at least. That’s not to say the materials or build quality are lacking… not at all. It’s clearly made from magnesium with a finish that matches the body. If you prefer a more discreet camera, the TL1 manages to cover the “Fujifilm” logo on the front of the EVF. Personally, I like the logo and wish the TL1 had a matching logo on the front rather on the top and hidden in use.

Functionally, it’s controlled with a knob on the right side and a lever beneath the EVF. The former locks the pitch in one of 4 detents, each placed at 22.5 degrees, along the 0-90 degree range. The latter controls yaw and also swings 45 degrees to the left and right with a total range of 90 degrees. There’s also a detent in the middle for re-centering the EVF. Both controls feel solid and secure, moving smoothly from locked to unlocked positions. The tilt and yaw movements are also buttery smooth with no sounds or grittiness. They truly worked to engineer this device to meet its $569 price tag. 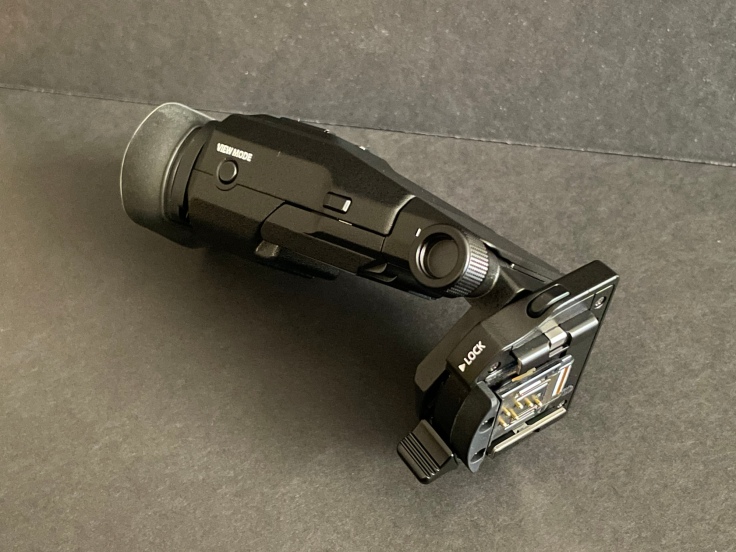 So, regarding the height and length: It will cause problems depending on your bag, however, the length can be moderated by turning the combo to the right, reducing the packed length. The body height can’t be affected beyond folding the combo to its flattest position. If needed, you can just remove the combo and pack it separately… that’s what I plan to do with one of my bags.

Altogether, the TL1 does exactly what I need. On a personal note, I’m losing visual acuity in my right eye faster than my left eye as I age. The adapter allows me to use my left eye more comfortably. The tilt and yaw movements also allow me to get into ground level positions without having to lay on the ground while still using the EVF, both in landscape and portrait orientation. In the end, I wish I had bought this when I’d originally bought the body.

But let’s be honest: this is not a necessary part for the GFX 50S. It’s a luxury item for most people and only the most ardent EVF users will find it worth the cost. In opposition, some people will find the LCD to be perfectly adequate, and more convenient, for their needs. For them, they can just remove the EVF and leave it in the box. Ultimately, for anyone who demands to use the viewfinder, the EVF-TL1 will help them meet that want. Best of all, the EVF-TL1 is fully compatible with the GFX 100, so it’s one more thing you can carry over to your next body.